We’ve finally found a place in life where size really does matter — poker. The biggest chip stack is usually the most powerful one, but for more reasons than you think. For starters, it shows other players that you have the power to make crushing decisions. You can bet harder, you can risk more, and you can intimidate people simply with the size of your stack. You can also afford to play more hands rather than having to sit out primarily because you just can’t play the hand. Remember that in a poker match the blinds are going to rise significantly. You want to make sure that you have enough money to cover each rise — just 10 times the big blind isn’t enough anymore. A lot of people that are trying to play aggressive, powerful poker aim for about 40 times the big blind.

The numbers aren’t as intimidating as you might expect. In a 3/6 match, 40 times the big blind is going to be $240. 100 times would be $600. If you’ve got a solid strategy and you think you can add more chips without losing them per your own bankroll comfort, then you can go 100 times the big blind. However, 40-50 is perfectly fine. That gives you a mighty stack to play with without going over your budget. Losing your whole bankroll in a single poker game would not be a great thing for the ego at all. 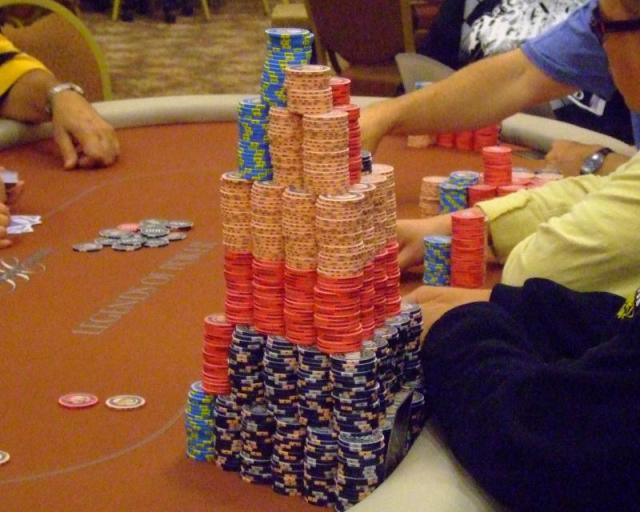 The size of your opponents’ chips will tell you a few things as well. The best players are going to have amazing bankrolls, and you should definitely assume that they can play just as hard as you, if not harder. In addition, you will also need to think about the type of player that has a small stack. Now, psychology wise, you have to realize that the small player is usually pretty nervous to make big decisions. That’s not always the case, but when it’s time to push, a lot of smaller players choose to fold instead. They don’t want to lose the bankroll that they’ve worked so hard to earn. You can flip this to your advantage — and yes, we understand that this is a little dirty, but all is fair in poker. You’re playing to win, and that means that you will need to focus on the targets that are the easiest to get rid of first. A lot of new players with weak poker strategies try to play every hand, because they think that’s what is really going to make them money. This means that you really don’t want to bluff a “calling station” player like this, because they’ll just call and keep playing — even when it costs them money. However, poker is also a game of luck and this means that there are definitely going to be times where you lose money going against a weaker player simply because the cards you needed never materialized.

The mathematics of poker are still in effect — you need to be calculating pot odds and card odds as well. It might take some time, but eventually you’ll get used to it.

Doing some due diligence on the people that you’re playing against can help as well because you want to see their percentages. We mean how many times they’ve raised preflop, or bet hard pre-flop. You also want to see how often they flop. All of these measurements are going to help you refine how you approach these players. Keep in mind though that they are going to be aiming just as hard for you as well!

The amazing beauty of poker is that there are so many different ways to approach a problem. You can always learn from your mistakes and get better and better with time — there’s no need to feel like you have to give up before you even begin. While we have picked on newbie players a little bit, it’s important to realize that we were all super new to the game and we had to make mistakes. As long as we learn from our mistakes, there’s value in playing. However, you never want to get to a point where you just stop learning. Even the greatest poker players in the world are constantly learning something that can improve their poker game — why wouldn’t you want to follow suit, so to speak? Get started today!